What Impact data reveals: 2020 benchmarks for 6 top verticals during the COVID-19 crisis

COVID-19 has affected nearly every facet of our lives — consumers are spending differently and businesses are restructuring the way they operate. We know things have changed dramatically, but we wanted to find out from the data exactly how they have. To do that, Impact’s data scientists conducted week-over-week analysis to find out what trends […] 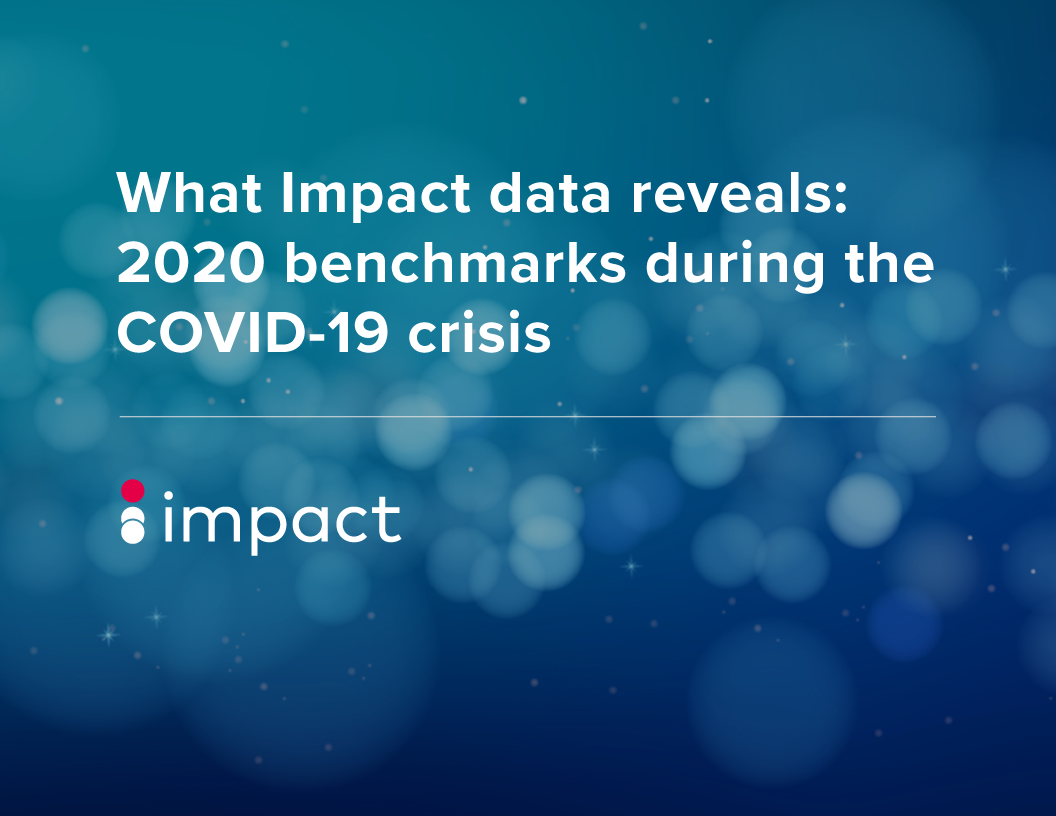 COVID-19 has affected nearly every facet of our lives — consumers are spending differently and businesses are restructuring the way they operate. We know things have changed dramatically, but we wanted to find out from the data exactly how they have. To do that, Impact’s data scientists conducted week-over-week analysis to find out what trends have emerged as a result of the virus and establish useful benchmarks.

Our preliminary findings reveal a few key trends, including:

Below you can take a deeper look at what the data reveals about how key verticals, including apparel, electronics, flowers/gifts, health & beauty, home & garden, and telco/utilities — have performed during this unusual time period.

First, the methodology behind the results

Impact’s analysis starts on January 5 and goes through to May 2. This timeframe offers a full picture into U.S. consumer behavior from before the World Health Organization’s announcement of COVID-19 as a global pandemic on March 11 and the changes during subsequent weeks as states declared stay-at-home orders.

Our data was pulled using the same cohort of brands across groups, remaining consistent across each week. We ran a statistical analysis to determine the number of brands to include in each category and identified and filtered out outliers that drove entire categories.

Following a decrease in clicks and actions from February 9 to March 15, revenue growth in the Apparel, Shoe, and Accessories category was primarily driven from an increase in actions even while basket size decreased. The increasing conversion rate since March 8 also indicates potentially higher efficiency in marketing efforts through the affiliate channel as consumers started purchasing more after the stay-at-home orders were put into place.

Starting March 8, Computers and Electronics saw a growth in revenue from an increase in actions while basket size remained unchanged. It’s interesting to note that the upward trends in revenue and actions started around the same time that major tech companies started enforcing work-from-home policies. This uptick could be attributed to employees transforming their homes into office spaces with monitors, additional computers, and so on.

Love was in the air around February 14 or Valentine’s Day, resulting in a seasonal peak at that time in revenue, primarily driven by an increase in actions while the average order value remained flat. Starting the week of March 8, there was an increase in revenue, actions, clicks, and commission that can likely be attributed to the changing food and drink consumption patterns in response to national stay-at-home orders.

Consumers were buying groceries online via delivery services and ordering non-perishable foods in bulk. Additionally, people appeared to be more likely to purchase gifts and flowers to send to others during prolonged periods of uncertainty.

4.Health and Beauty / 5.Home and Garden

Both the Health and Beauty and the Home and Garden verticals saw similar results. Their revenue grew steadily starting the week of March 15 with growth being driven by an increase in actions. With more time spent at home, consumers spent more money and time on themselves when it came to health and wellness.

Furthermore, consumers were likely using the increased time at home to focus on home projects, such as small home renovations, gardening, and other home improvements. Interestingly, AOVs and conversion rates remained comparatively flat.

Revenue grew in Telco and Utilities starting right around the time that the standardized work-from-home order was declared by most companies. Companies that weren’t as equipped to sustain a long work-from-home situation saw themselves looking for technology and infrastructure to help keep their businesses running throughout the duration of this time. AOVs and conversion rates remained relatively flat.

What this data reveals about where partnerships stand now

Advertisers saw an overall increase in revenue, clicks, and actions during the pandemic. COVID-19 has created a new normal when it comes to business operations and consumer behavior.

With consumers stuck at home, they are spending more time on their phones and computers than before. While they are not necessarily spending more money than they were before on goods and services in the verticals above, they are shopping online for items they would normally buy in-store.

Communication from brands to their partners is of the utmost importance, especially during times of crisis. Partnerships need to be closely aligned to take advantage of these changing spending trends with campaigns and promotions catering to the needs of the consumer. It can be challenging to manage communications, however. This is a perfect time to turn to Impact’s Partnership Automation™ with automated engagement tools and streamlined workflows that can keep your partners informed and up to speed with new ideas and promotions — everyone can stay prepared during times of uncertainty.

To be ready for anything and everything that comes your way during tumultuous times, reach out to an Impact growth technologist at grow@impact.com. We can help guide you through.