January 6 marked a full year since Impact’s data scientists began tracking the performance of key metrics across the partnership channel. Few predicted that we would still be seeing record numbers of deaths from the disease, but even fewer would have bet on safe and effective vaccines being administered less than a year after the […] 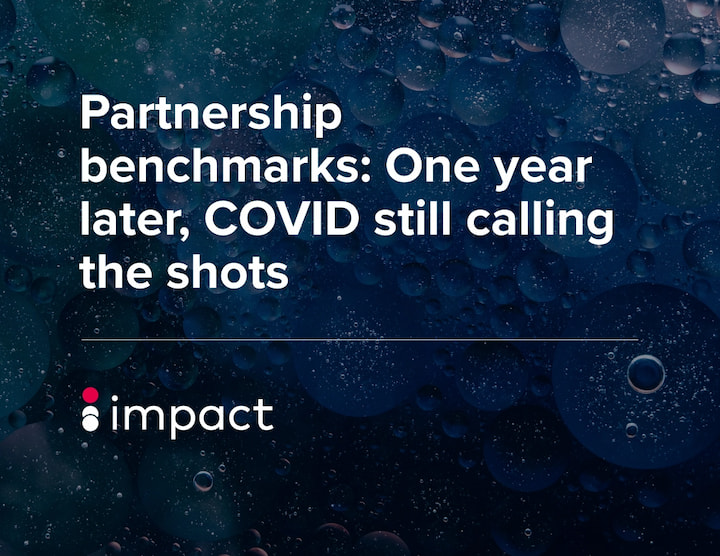 January 6 marked a full year since Impact’s data scientists began tracking the performance of key metrics across the partnership channel. Few predicted that we would still be seeing record numbers of deaths from the disease, but even fewer would have bet on safe and effective vaccines being administered less than a year after the first case was reported in the United States.

We published our partnership benchmarks for the first time in May of 2020 and continue to provide a monthly analysis of eight key verticals in the United States. Each month, we compare these verticals to previous months and to Impact’s benchmarks based on pre-pandemic data. With this data, our advertisers and their partners can stay informed, benchmark their campaigns, and calibrate their decisions as needed.

What the data shows for January:

Conversion rate picked up after December’s drop but remains below baseline. AOV has returned to approximately 25% above baseline, about where it was in October.

After peaking and dropping around the holidays, both revenue and commissions flattened in January to about +50% YoY. Commissions performed slightly higher relative to revenue, showing that retailers were sharing more of their profits with partners in the first few weeks of the new year.

This report features week-over-week (WoW) benchmarking on eight verticals to show how events around COVID-19 have impacted partnership metrics.

Clicks and conversions returned to their pre-holiday levels and hovered around baseline by the end of the month.

Average order value (AOV) remained relatively strong in January in the apparel sector, staying close to 50% above baseline. Conversion rate recovered slightly after its December tumble but remained well below baseline and at about pre-holiday levels.

Both revenues and commissions halted their swift December drop above baseline and remained fairly steady through January. Retailers in this segment were sharing a slightly smaller share of their revenue with partners than they had through most of 2020, however.

Clicks have stayed very consistent since last summer in this category, spending most of January at about 30% below baseline levels. Conversions in this vertical dropped in January but remain strong compared to most 2020 benchmarks.

January was another month of flat clicks and relatively high conversions in this sector, contributing to lower but strong conversion rates.  AOV was up slightly from the end of 2021 but still significantly below baseline.

Clicks were down and conversions were up for the computers and electronics sector by the end of January, signalling high conversion rates and overall conversion performance at about 40% above baseline.

This sector is important for the stay-at-home economy, so while AOV was down from December, it remains well above baseline. Conversion rates also ended January about 15% above baseline.

Commissions popped back up from low points at the end of December, converging with revenues to signal more sharing of profits with partners and strong partnership performance YoY.

January returned this sector to levels just above those of late summer and, with luck, is headed toward higher performance for Valentine’s Day and springtime holidays.

Conversion rates in the category stayed below baseline for January, while AOV returned roughly to its April position.

Revenues and commissions in this vertical stayed in tight synchrony during January, slightly rising after losing most of their holiday gains.

After dropping fast during December in the health and beauty sector, clicks and conversions were stable during January. Nevertheless, clicks remained below baseline.

Conversion rate and AOV both flattened out during January for the health and beauty sector, with AOV modestly above baseline and most of 2020.

Partnership revenue landed around 50% above baseline for January, commissions barely outpaced baseline and revealed one of the biggest gaps between revenue and partner payouts since January 2020.

Conversions in this sector ended the year right where they began, while clicks stayed at levels about 85% above January 2020.

High clicks relative to conversions kept conversion rates at their lowest levels in the past 12 months in January. AOV in this sector stabilized at about 35% above baseline.

In terms of sharing profitability with partners, this sector was a relative leader for most of 2020. The gap widened in December and remained disproportionate in January.

Telco and utilities experienced pandemic peaks in conversions in late April and during the holidays. Clicks were slightly more consistent month-to-month and remained at or above baseline all year. Both remained roughly +10%  YoY in January as we enter a new year reliant on remote access.

AOV for telcos and utilities rose steadily over the course of 2020 and entered January on a slight downward trend but well above baseline. CR came in about +3% YoY for January.

Revenue diverged significantly from commissions paid over the holidays. In January, there was  a shift toward alignment as revenue fell to about +38% YoY and commissions crept slightly upward.

Unfortunately, the travel sector remains consistently and predictably suppressed, with January figures for conversions barely rising and clicks flatlined at a tiny fraction of their baseline numbers.

Meager clicks pushed conversion rates to their 12-month high for the year for the travel sector, and AOV was trending upward for January.

Throughout 2020 and into January, commissions and revenue have remained tightly aligned in this segment, despite overall sector depression. That trend remained in January. Let’s hope when the industry can emerge from pandemic lockdown, the spoils are shared with brands and partners alike.

A year ago we were just beginning to fathom what 2020 had in store, and 12 months later there is no uniformly positive news to report. As vaccinations continue, understanding of the virus grows, and weather warms, we will continue to track progress in the partnership sector in 2021 and hope for a turning point we can celebrate.

To see how you can connect with your audiences in authentic and valuable ways through partnerships, reach out to an Impact growth technologist at grow@impact.com. We’ll help guide you through. Benchmarking for brands: How data forms powerful guideposts for your affiliate program How to start a partnership marketing program