June saw myriad changes in restrictions across the United States — and not surprisingly, it has affected consumer behavior. We began tracking six key verticals in April, which we documented in our first benchmarks report, which was about a month after most states issued lockdowns or stay-at-home orders — several verticals experienced sharp spikes as […]

June saw myriad changes in restrictions across the United States — and not surprisingly, it has affected consumer behavior. We began tracking six key verticals in April, which we documented in our first benchmarks report, which was about a month after most states issued lockdowns or stay-at-home orders — several verticals experienced sharp spikes as people shifted to online shopping. On June 12th in our second update, data indicated sharp declines from April’s peaks on several key metrics like conversion.

A number of states reopened in early May while most of the Northeast and harder hit states did not reopen until late May or early June. Impact’s data scientists updated the week-over-week analysis on six key verticals to see which direction the trends have taken — how has the reopening affected affiliate and partnership programs?

Some verticals continue to do well, but on aggregate, the industry returned to pre-pandemic baselines

Overall, the verticals with partnership programs that continue to do well (as measured by revenue driven) are Computers & Electronics; Flowers, Gifts, Food, & Drink; Health & Beauty; and Telco & Utilities. The Apparel, Shoes, & Accessories and the Home & Garden verticals fared worse. They are now slightly below pre-pandemic levels throughout June. General observations about recent changes include:

Impact’s analysis started the week of January 5 and goes through the week of June 28 (the week of Independence Day in the United States). This timeframe offers a full picture of U.S. consumer behavior from:

We pulled our data using the same cohort of brands across groups, remaining consistent  across each week. We ran a statistical analysis to determine the number of brands to include in each category, identifying and filtering out outliers that drove entire categories.

The Apparel, Shoes, & Accessories vertical saw clicks peak the week of June 7th while conversion rates dropped precipitously. This meant there were a lot of low-quality clicks.

As a result, the rapid decline in revenue and commissions we saw in May appears to have flattened out in June to a level similar to the early days of the pandemic, which was significantly below the baseline.

Clicks for the Computers & Electronics vertical continued to decline throughout June, while conversion and conversion rates slowly ticked back up. Basket size continued its ascent, peaking the week of June 21. This resulted in an overall increase in revenues throughout June although commissions remained flat. Revenues and commissions still remain significantly above their pre-pandemic levels.

Back-to-school season is getting underway, and even with some uncertainty around the status of school reopenings in September, we may still see seasonal impact in the Computers & Electronics category as the summer progresses.

Clicks in the Flowers, Gifts, Food, & Drink categories declined throughout June. Conversions and conversion rates had an early June mini-recovery from May declines but resumed their descent later in June. As a result, revenues and commissions had a small peak early in the month, followed by sharp declines in late June. This brought both metrics close to their pre-pandemic levels. Basket size remained extremely high for all of June, peaking the week of June 14.

Clicks in the Health & Beauty vertical edged back up in June but conversion rates on these clicks dropped for the month, leading to a relatively flat number of conversions throughout June. Basket size inched upward throughout June. As a result, revenues were flat throughout most of the month, while commissions steadily declined. Nonetheless, both revenue and commissions are still above their pre-pandemic levels from the start of the year.

Clicks continue to remain high for the Home & Garden vertical and increased in June. However, this was accompanied by a June decline in conversion and conversion rates. A notable exception was the last week of June where we saw a significant uptick. As a result, revenues and commissions are down from their April and May highs, and returned to their pre-pandemic levels for most of June.

Telco & Utilities partnership programs continue to do well despite being several months into the pandemic. All U.S. states had reopened by June, so perhaps less anxiety about moving around was good for this vertical.

Although clicks slightly increased in June, conversion rates significantly dropped in the past few weeks and resulted in fewer conversions in June. AOV, which went down in the pandemic’s early months, has ticked back up to pre-pandemic levels. As a result, revenues and commissions edged downward in June but are still significantly higher than their pre-pandemic levels. 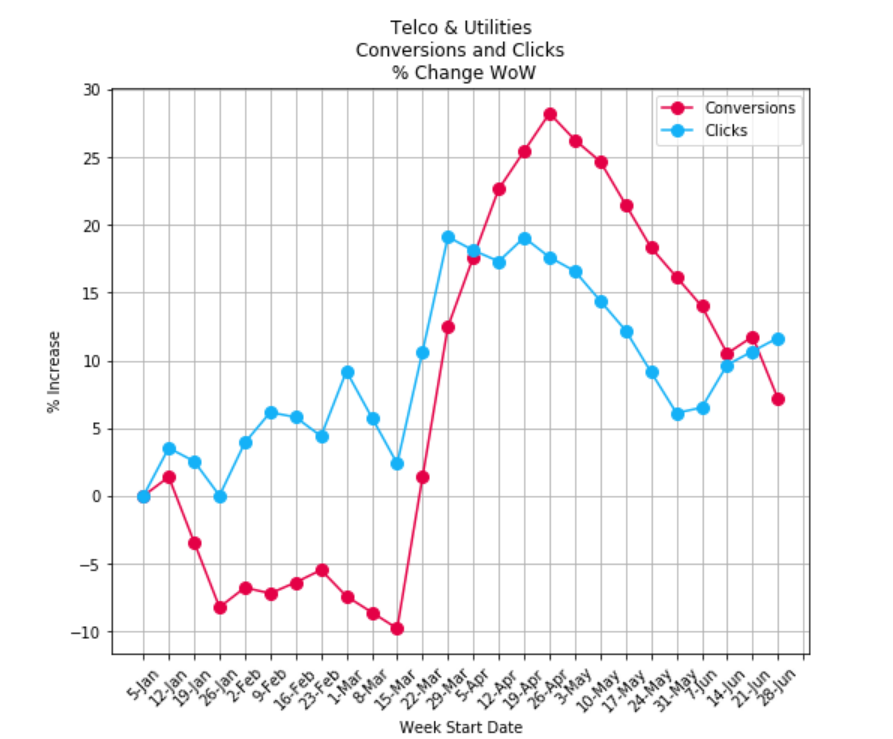 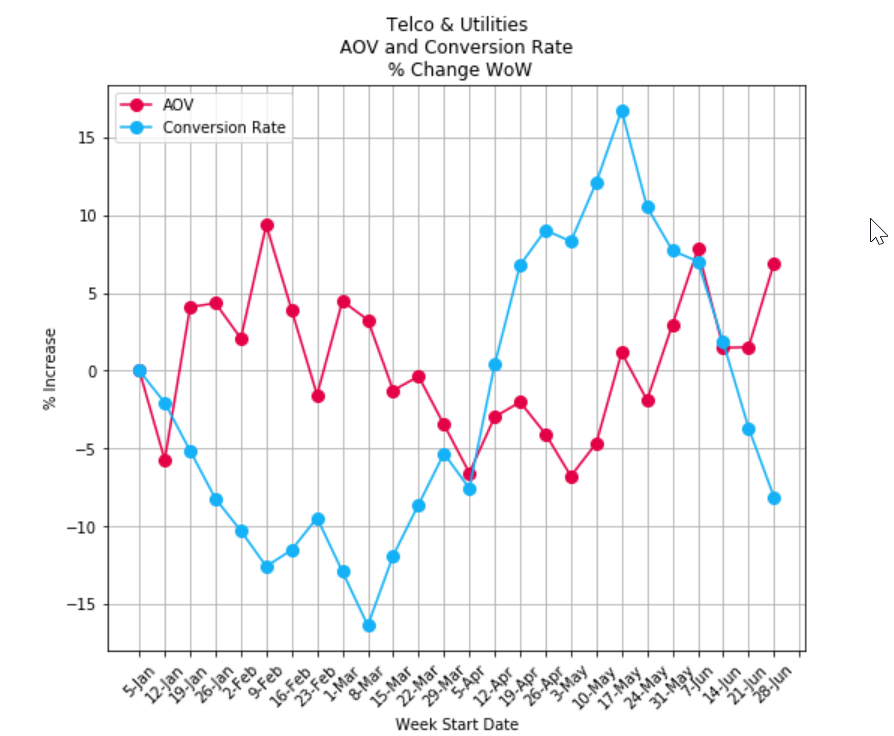 Conclusion: Partnerships proven to be effective as a way to sustain or even grow businesses during a recession

As of June 9, the United States is officially in recession. Many companies have scaled down their marketing spend, shut down their hard-to-measure channels, and implemented hiring freezes across the board, including sales teams. But they are still looking for innovative ways to sustain their revenues while clamping down on traditional revenue levers.

Other bullish companies are looking to grow — if not whole enterprises, certainly their digital businesses. Affiliate and partnership programs have remained a highly efficient and highly attributable way to drive growth in the digital era, with the best ROAS compared to other revenue channels. Partnership automation technologies like the Impact Partnership Cloud™ allow you to scale those programs and drive truly meaningful growth.

With infection rates again on the rise in the United States and a number of regions in the country rolling back reopening plans, it is hard to predict where these metrics will go in July. We’ll continue to inform our clients, partners, and the industry what we’re seeing in the data, so stay tuned.

To find out more about the best way to sustain revenues and possibly grow during a recession, reach out to an Impact growth technologist at grow@impact.com. We’ll help guide you through.