As hard as it is to believe, October was the worst month of the pandemic for the United States. While the nation never truly experienced a reprieve, confirmed COVID-19 cases had come down from a July peak. Unfortunately, any gains in controlling the virus were erased in October as numbers began skyrocketing late in the month and 31 states set one-day coronavirus case records. Fears of a second wave seemed to be confirmed, and the United States neared the presidential elections with no end to the crisis in sight.

Impact’s data scientists have been tracking the performance of key metrics across the partnership channel since January 6. We published those results for the first time in May and continue to provide a monthly analysis of 8 key verticals in the United States. Each month, we compare these verticals to previous months, as well as to Impact’s benchmarks, based on pre-pandemic data. With this data, our advertisers and their partners can stay informed, benchmark their campaigns, and calibrate their decisions as needed.

What the data shows for October:

Clicks had been on a steady decline since an August peak, but they finally trended positively in October. Conversions, meanwhile, fell below the baseline established at the start of the year, erasing positive growth from September.

AOV hit a new high point for the year in mid-October, rising to 40% above baseline before falling back slightly by the end of the month. Conversion rates failed to continue their upward trend from September, sliding back to more than 20% below baseline.

Revenues and commissions both hit their highest points since May before declining slightly at the end of October. Both remain about 20% above baseline, right where they began the month, and continue to perform better than the pre-pandemic period from January through March.

Clicks and conversions went in opposite directions in the Apparel, Shoes, and Accessories category. Clicks were modestly higher compared to the end of September, and about even with the baseline. Conversions fell steeply by about 10% compared to the previous month, to roughly 30% below the baseline at the start of the year.

Similar to conversions, conversion rates declined in October, wiping away a month of improvement from September and ending the month 30% below baseline. As conversions declined, average order value continued its upward trajectory, reaching a new high at the end of October. Basket sizes were 75% above the baseline set at the start of the year, perhaps tied to the surge in COVID cases and a desire to stock up on necessary items ahead of winter.

Both revenues and commissions finished October lower than when the month began, likely due to the decrease in conversions. Revenues were actually up the first week of the month, hitting their highest point since late April, and coinciding with a slight uptick in conversions. They fell throughout the rest of the month, but still remained 20% greater than the baseline. Commissions took a step back, falling below baseline for the first time since August and ending the month 10% below. 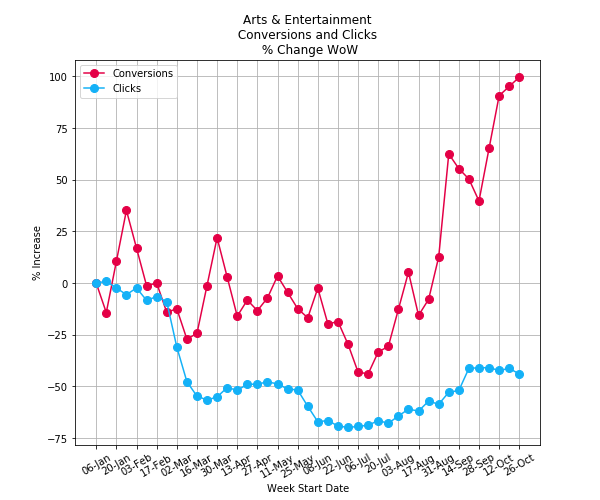 Clicks remained flat in October following months of gradual improvement. October also saw conversions reverse a September slide, skyrocketing in the early half of the month before hitting a new peak at 100% above baseline by month’s end.

Flat clicks and a new peak in conversions led to greater than 150% growth in conversion rates when compared to September, while also establishing a new high for the year. This follows a trend of ups and downs with conversion rate throughout 2020: as September saw a 150 point decline, October reversed that, as conversion rates went from 100% to 250% above baseline. AOV meanwhile, continued a slow decline and ended the month more than 50% below baseline.

Arts and Entertainment revenues on a whole remained below levels from the start of the year, but actually reached their highest point since early March during the first week of October. Commissions were up and down throughout the month, and nearly equalled a peak set in September before they ended the month at the baseline.

In the Computers and Electronics category, clicks remained high, but continued to drop. The category fell by about 15% during October and ended the month about 25% above the baseline. Conversions declined slightly but remained about 10% below the baseline.

Conversion rates for this category have yet to recover to pre-pandemic levels. Rates fell at the start of the month and remained flat from then on, at about 30% below the start-of-the-year baseline. Average order value, meanwhile, fell by about 5% compared to September, but still remained a healthy 35% above baseline.

Both revenues and commissions were up and down throughout October, but remained above pre-pandemic measurements. Commissions actually dipped below the start-of-the-year baseline mid-month, but by October’s end they were 10% above baseline. Revenues fell, compared to September, but were still around 20% above baseline.

Flowers, Gifts, Food, and Drink experienced growth in both clicks and conversions in October. While a Mother’s Day spike will minimize the appearance of growth going forward, clicks grew a healthy 30% in October, to go along with a 15% increase in conversions.

Conversion rates had been on an upward trend since mid-May, but experienced a steep drop throughout October, as they fell 25% over the course of the month. Basket size recovered from a September drop-off and ended the month about 35% above the start-of-the-year baseline though.

Revenues in this category continued a slow increase that began in mid-June. An uptick at the very end of October had revenues about 70% above the start-of-the-year baseline. Commissions slid at the start of the month, but did end on a high note, as they rose above the baseline and hit their highest point since June.

Both clicks and conversions in the Health and Beauty category saw setbacks in October. Clicks continued a slow, steady fall that began in early September, and reached 20% below the start-of-the-year benchmarks. Conversions have hit peaks and valleys throughout the year, and October marked a valley month as they were down nearly 20% compared to September.

Drops in both clicks and conversions led to a drop in conversion rate. By mid-October, conversion rates fell nearly 20% compared to September before a small recovery in the last week of the month. Still, conversion rates remained healthy, roughly 50% above the start-of-the-year baseline. October marked a month of recovery for average order value, as that metric ended the month 5% above baseline.

Lower conversions and lower conversion rates led to lower revenues and commissions in Health & Beauty this month. Commissions fell about 10% compared to the start of September, while revenues fell nearly 15%. This revenue decline put revenues at the lowest they’ve been since early March, although that’s still greater than 20% above the start-of-the-year baseline.

Clicks were up and down in the Home and Garden. Even as a late-month fall erased some growth, clicks remained about 50% above the start-of-the-year baseline. Meanwhile, conversions clawed their way back to the baseline.

Conversion rates remain low, failing to climb much since they cratered in May. Basket size hit a new peak in October, bouncing back after a sharp fall in September. With COVID cases on the rise and the reality of a winter spent indoors, consumers seemed to feel the need to buy furniture again.

Revenues and commissions were both up about 20% from mid-September, as the two categories continued to bounce back following major falls in late August. Commissions were in excess of 60% above baseline, and revenues ended the month 20% above.

Telco and Utilities saw signs of a modest rebound in clicks and conversions, as the two metrics were up nearly 10% compared to September. Clicks were 10% above the start-of-the-year baseline, while conversions clawed their way back to the positive side, ending the month 5% above baseline.

Clicks had more positive growth on the month than conversions, so conversion rate declined compared to September. Average order values remained high, even after falling in the early parts of the month. Basket size rebounded late in October, ending the month more than 30% above start-of-the-year baseline.

Revenues rose in October, erasing September’s drop to hit a new peak by month’s end. Commissions, however, continued to slide, falling below the start-of-the-year baseline for the first time since early March.

Travel’s woes continued into October, continuing a gentle decline that began in late May. Clicks ended the month more than 80% below start-of-the-year baseline, while conversions fell to 75% below. 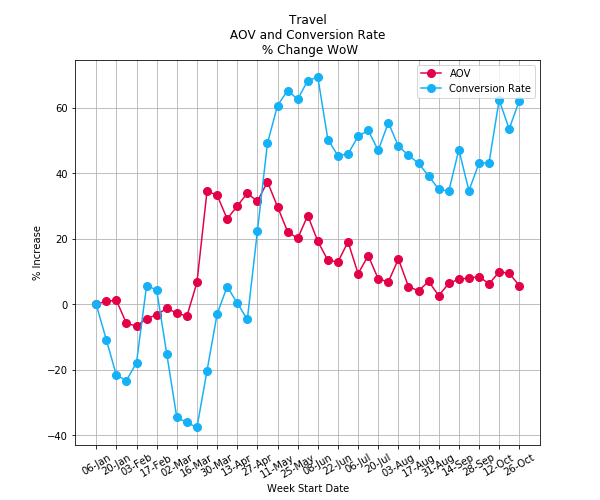 Conversion rates remained high in travel, likely a result of incredibly low click volume. Conversion rate grew in October, to around 60% above start-of-the-year baseline. Following some small ups and downs, average order value ended October where it began the month: about 10% above baseline. 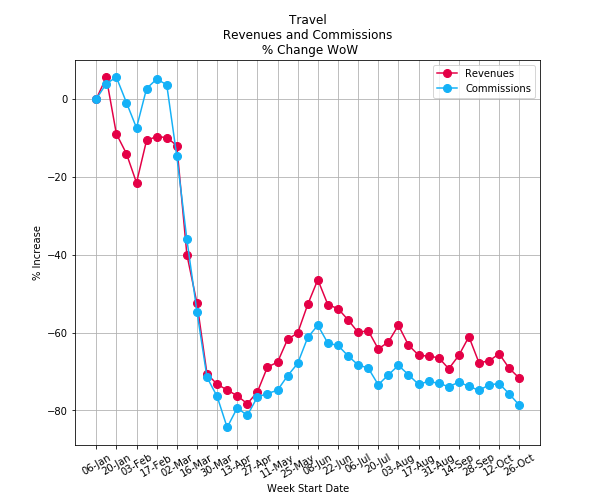 Travel revenues and commissions continued their slide in October. Revenue was more than 70% below baseline, with commissions a solid 80% underneath the baseline.

It’s difficult to predict where the virus and the economy will be in the months ahead. The Federal Reserve chairman predicts that the U.S. economic recovery will falter without additional stimulus from the federal government. With confirmed case counts coming in record numbers on an almost daily basis at the end of October, it’s clear that a second wave has arrived, with a confined winter looming.

In nerve-wracking times like these, consumers tend to rely on brands, publishers, and people they trust. Partnerships guarantee a greater level of authenticity because their partners have mutually aligned incentives and goals to provide the best content – content that is educational, informative, and useful – to their audience.

Pandemic trends in Southeast Asia may offer a view of your future: Download the report

Candles and cranberries: Here’s what the Impact team is celebrating around the world

How Easyship reached new markets by diversifying its partnerships